For the uninitiated, ‘Civilization’ is a turn-by-turn strategy game that has made millions addicted to it. It given its unique premise that gives the player immense control and powers, as if he/she were a god. Basically, this has always been the idea of ​​strategy games since time immemorial: flooding the user into the gameplay by allowing them to ‘create’ something from scratch and let them play God for a while.

Sid Meier’s Civilization got off to a modest start in the early 1990s until the sixth series that the game recently entered. For all fans of strategy games, ‘Civilization’ offers everything that a typical strategy game can offer and much more. The game starts with you as the player choosing your empire (from options such as Indian, Roman, Aztec, etc.). The historical figure (such as a lord or king or ruler of a kingdom you have chosen to play for). And the gameplay constitutes a step-by-step improvement you choose to make over a period of time to take your civilization to new heights and evolve.

After creating cities by yourself, resources are generated, such as food resources, units, military, technological advancements, currency, diplomacy. And you as the leader of your civilization can attack other cities (obviously taking one turn at a time unlike ‘Age of Empires’) or build defenses. Unlike other similar strategy games, the central idea of ​​’Civilization’ is not to achieve supremacy by razing and plundering other civilizations. But by evolving on your own, improving your cities, and also trying to achieve a diplomatic victory instead of the usual. bloodbath. In my humble opinion, this is the meaning of ‘strategy’.

More often than not, ‘Civilization’ over the years has influenced a multitude of strategy games by improving on its own and has reached something of a benchmark in its game genre. Here is the list of Civilization-like video games that are our recommendations. You can play these games like Civilization for PlayStation 4, Mac, Xbox 360, Xbox One, and even online.

10. The Battle for Wesnoth 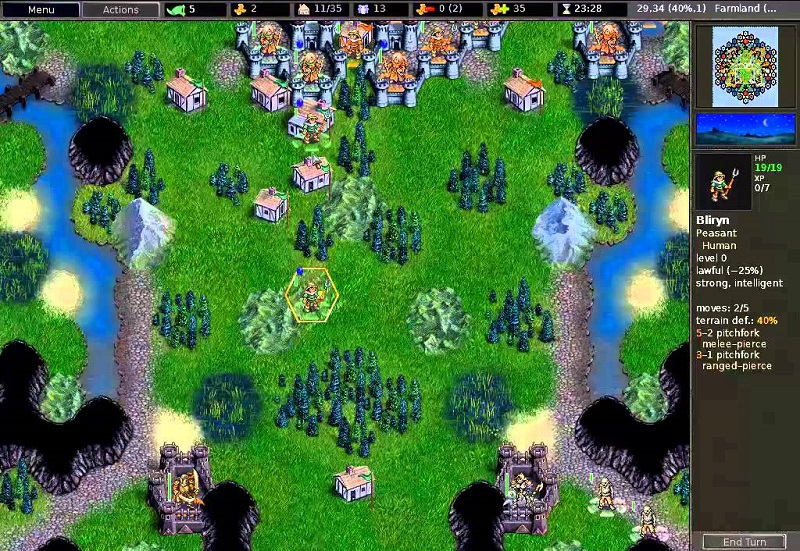 Perhaps the highlight of ‘The Battle for Wesnoth’ is the fact that you can download and play free. The open-source game resembles ‘Civilization’ on many levels: be its turn-based gameplay, defending civilization from mystical beings, winning over opponents, crushing rebellions, or claiming the throne. The gameplay consists of the same old turn-based approach, where, in a hexagonal grid, you can choose where to mount units and how to build defenses. While I didn’t really like the graphics, which look like an old DOS-based game. The essence of the game is close to that of ‘Civilization’, which is why it was listed.

‘Master of Orion’ is basically ‘Civilization’ brought into space, including stars, planets, asteroids, and galaxies. The gameplay is all about choosing one of the races of beings to start with, where each race has its own special powers, affinities, and reserves against another race. When you start playing, with a mothership as a base and some scout ships to explore nearby regions. You can colonize planets, take down hostiles by evolving in terms of technology. And even achieve victory by conquering ‘Orion’, the master of them all. The premise is well thought out and is apparently very exciting. But the experience is relatively slow compared to others on this list. However, it is the only space game I speak of, as far as this list is concerned.

‘Expeditions: Conquistador’ is almost identical to ‘Civilization’ in all respects, except that it is limited to niche gameplay and not as extensive as the former. As a player, you are essentially a conquistador. As a sort of explorer whose only role is in tactical and strategic planning, attack, and defense. The units are made up of defense units, attack units, healers, scholars. And explorers and all you have to do is delegate your expeditions to these units arranged in a hexagonal grid. The game looks like just another version of ‘Civilization’ set in a relatively modern era. For ‘Civilization’ fans looking to branch out into a different kind of gameplay, this might be a perfect match.

If you were to rule out the turn-by-turn gameplay, which is perhaps the centerpiece of ‘Civilization’, along with the hexadecimal grids, ‘Age of Empires’ and ‘Civilization’ have a lot to talk about during drinks. The gameplay is relatively simple and widely known. As I personally know very few people haven’t come across this ubiquitous strategy game. It leads your kingdom to victory by building defenses, using available resources, training / adding military units, and deploying them, while progressed through the eras, namely Discovery Age, Industrial Age et al. ‘Age of Empires’ has seen a huge following of fans, despite the fact that it has been years since we saw a more recent version of the game after AOE III. Rumor has it that ‘Age of Empires IV’

A complicated, perhaps more mature version of ‘Age of Empires’ set in the context of Nazi Germany, ‘RUSE’ is all about optimal resource utilization if I had to summarize. The background is the Second World War, in which it is the rift between the allied powers and those of the axis that counts. Enter tanks, battalions, spies, lures, and viola – the fantastic strategy game is here. More or less, you end up checking the numbers in ‘RUSE’ more than anything else. And by the end of the game, victory is a simple combination of warfare tactics. And the number of units that would go through some of the grueling battle scenes. 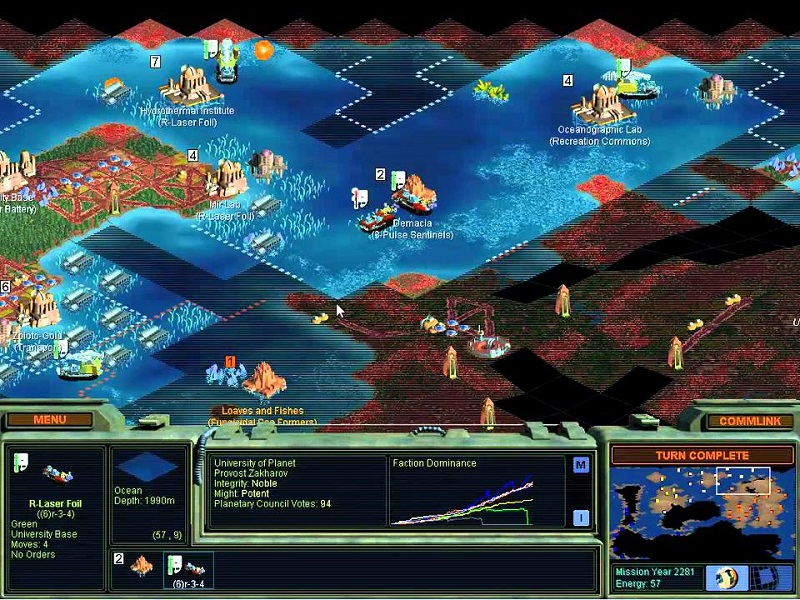 Along the lines of ‘Civilization’ when Sid Meier’s ‘Alpha Centauri’ came out. It was met with rave reviews and was widely praised, partly because it picked up the positive notes of its close cousin who is ‘Civilization’. Alpha Centauri takes place in another solar system of the same name, on a planet called Chiron. Given the game’s ‘alienated’ premise as opposed to ‘Civilization’ where we choose world leaders like Mahatma Gandhi etc. ‘Alpha Centauri’ features a series of fourteen such leaders across seven factions on the planet Chiron. As the game is two decades old. The graphics component is apparently lackluster by today’s standards. However, in the past, ‘Alpha Centauri’ has dominated our times.

4. Warlock: Master of the Arcane

Another inclusion in the turn-based strategy game genre, ‘Warlock: Master of the Arcane is, in my opinion, a level closer to what ‘Civilization’ is and has been. All you need to do as a player is to manage your resources well (gold, food, and mana – to cast a spell), command a host of warriors. And gain access to new avenues, such as maps, resources, and factions while moving forward with the gameplay. There are mainly three factions: humans, monsters, and zombies or the undead. While the warriors and human resources seem regular. The monsters come straight from a fairytale that includes goblins, orcs, and others. The undead includes the creepy boys: bats, worms, skeletal people, etc. To finish a game, it is necessary to set the possible wins at the beginning, like a holy conquest or victory. A great game for all ‘Civilization’ fans, with a magical tweak.

The futuristic ‘Anno 2205’ was my all-time favorite strategy game for a while (only until the release of AOE IV). You are in the future and part of a thriving company whose sole job is to build world-class infrastructure. And make technological advancements ahead of the competition. Citizen happiness quotient is important in the game and as metropolises grow and thrive. Better infrastructure needs to be built through research and also by colonizing newer places. Such as the Moon. While the game is essentially a city-building venture with relatively fewer battles, ‘Anno 2205’ is not only attractive in its graphics. It is also compelling and vast, just like ‘Civilization’.

With more renditions and spin-offs with similar characteristics, ‘Age of Wonders’ has layered maps compared to the single-surface maps we’ve seen so far in the list. Even though caves are often a bit addicting, I would love to stay grounded in a literal sense every time I play. The races are more or less similar to those of ‘Warlock: Master of the Arcane and many others, such as goblins, elves, etc. – basically ‘The Lord of the Rings brought to life. Then there are non-aligned races, such as sects that line up depending on other geographical factors or resources. Gold and Mana are also featured as the only two resources and a player spends his gameplay on resource optimization while dealing with other rival factions, diplomacy, superiority, and evolution. ‘

A turn-based strategy game yes, but not limited to the hex grid. But rather to a piece of land destined for each clan, ‘Total War: Shogun 2’ is set in the 16th century the Kingdom of Japan, where war-devastated and only a few factions are left in the aftermath, eventually seeking to wield power. The gameplay consists of a player alternating between a manager. And a general between each turn, planning tactics, managing armies, and assigned land, increasing resources and evolving in terms of technology.

As the game progresses, depending on which of the eight clans you belong to, based on your strengths and weaknesses. The game branches out to increase clan division and social unrest and as a player. You will have to take control of things that may not be under yours after all. The battle scenes are captivating and enjoyable to watch, as are the tactics. ‘Total War: Shogun 2’ is mind-blowing, with an overwhelming graphical quotient.

Spread the loveOn paper, until dawn reads like a cliche. Eight attractive young adults head to an isolated house for a weekend and are terrified by a masked killer? So far, so Friday the 13th. But what sets Supermassive’s branching horror narrative apart is its clever dismantling of these horror tropes, even as it cheerfully […]

Spread the loveVideo games exist for all tastes and colors. The so-called life simulators can have many forms, but one of the most popular is the farming simulator. Be a game that only focuses on having a farm or that has a little more than that, this genre is extremely entertaining and you can spend […]

What you need to know when choosing an online casino?

Spread the loveToday, there are many online casinos and a novice player has a difficult choice of which gambling establishment to choose. In turn, operators, in order to attract more new customers and keep permanent, are required to provide certain security guarantees.